I've gathered together a pile of Christmas issues of British comics to bring you some highlights of festive seasons past over the Advent period.

First off, one my own favourites from childhood: School Fun. 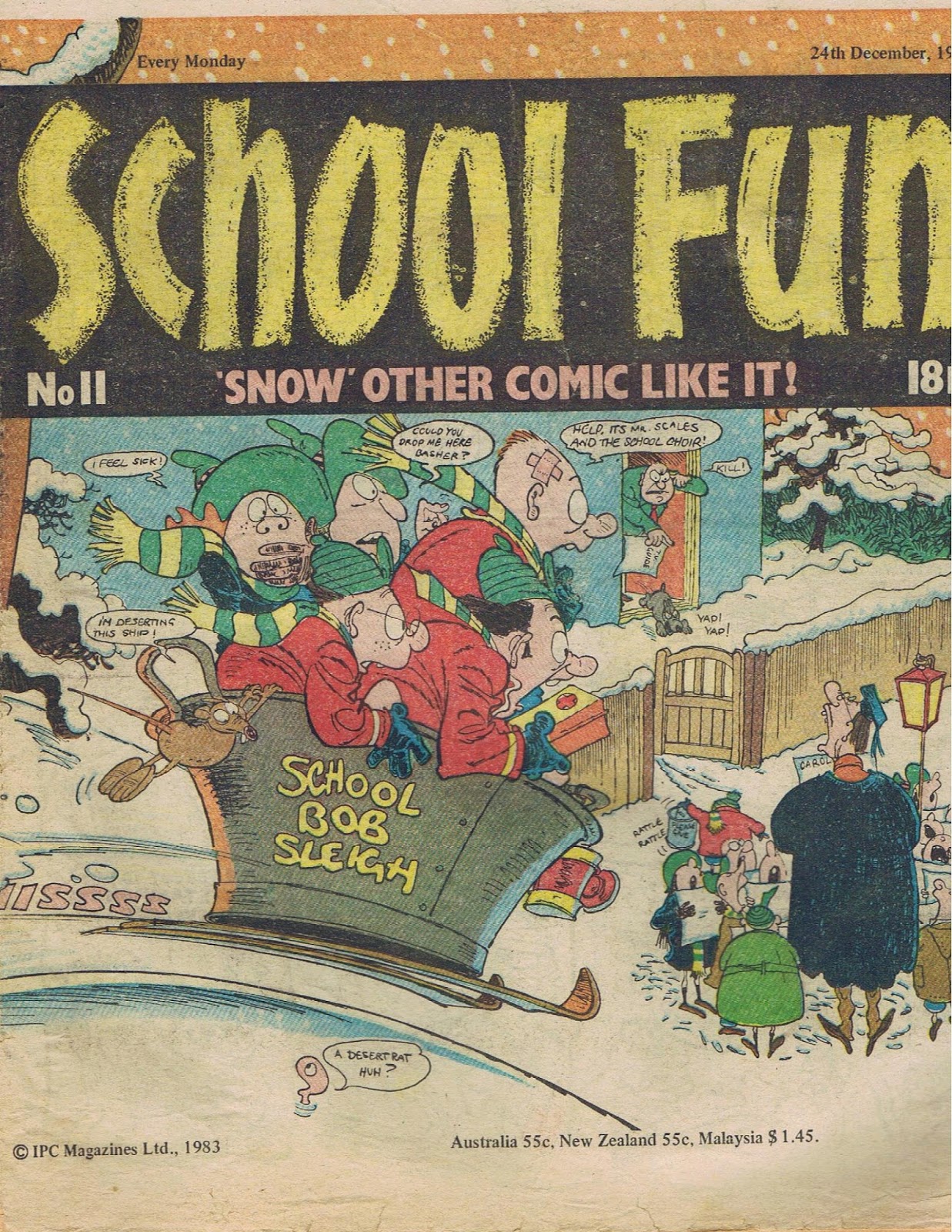 School Fun was a weekly comic published by IPC for just over six months between 1983-84 and I'm pretty sure I had every issue of it before it "merged" with Buster. It was a valiant attempt at a new humour title with the USP of being entirely themed around strips set in school.

In fact, the first issue even had an Origin story, whereby the editor's son came home complaining about how rubbish school was and his dad saying he'd prove school was fun! Really! The strip in question was Junior Ed, who would get the introductory page of every issue. Here they are receiving their "Christmas mail": 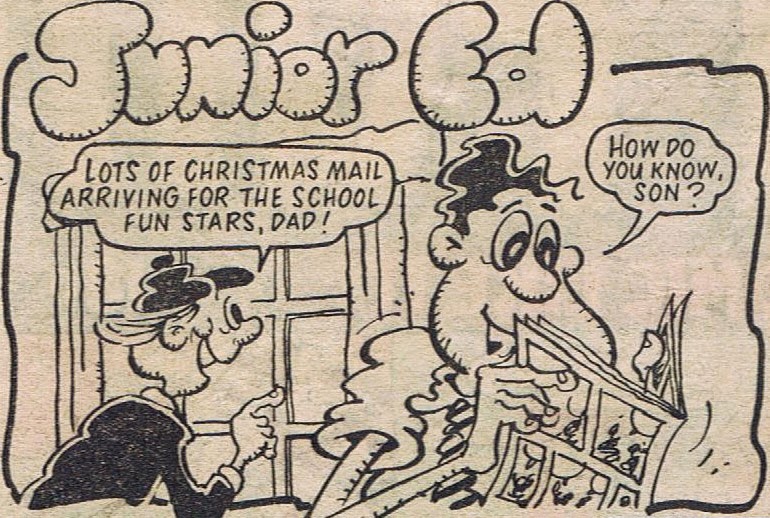 It should also be noted that the comic did not have a cover star, instead having a giant picture (going from front to back cover) depicting a whole bunch of school kids creating havoc in the best tradition of Ronald Searle or Leo Baxendale's When the Bell Rings. They were drawn by David Mostyn and they are pretty good.

After Ed, the next strip we get is Softy Sir, a character described in an encyclopaedia of British comics I remember getting out of the library when I was twelve as "the first openly gay British comics character". This is not strictly true and is fairly insultingly reductive but it does mark an interesting point in the softy/homosexual comedy stereotype. 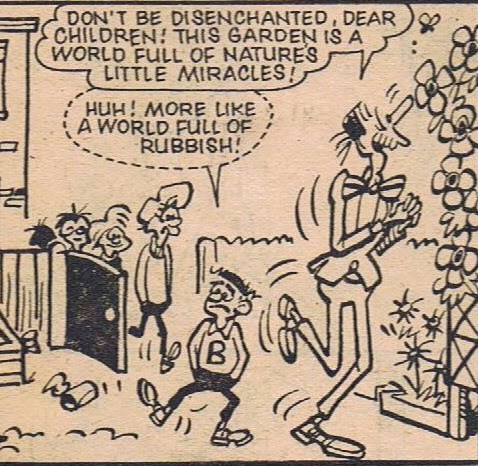 "Softy" is, of course, a word best associated with Dennis the Menace's adversaries and I have written before on the uncomfortable "gay bashing" analogies one can draw. Softy Sir is, in essence, Walter, all grown up and armed with a PGCE. The kids are revolted by his behaviour but usually end up suffering for any attempts to prank him. This issue's nature ramble, for example, ends with one child pretending to have ants in his pants and he's gotta dance and Sir decides to beat them out: 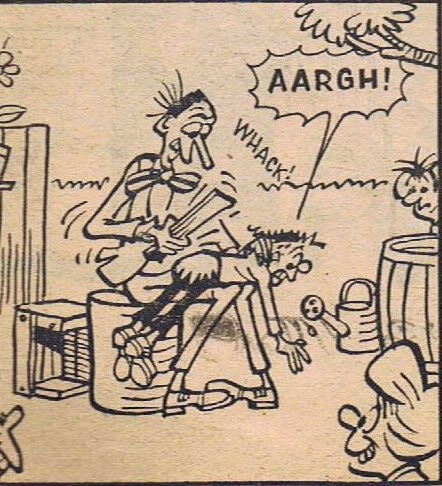 Ha ha! Corporal punishment was still a thing but it's funnier when a child is beaten for the wrong reason. Incidentally, this strip was drawn by the late Jim Petrie.

Next up we have Coronation Street school. Yep, a school featuring child versions of the cast of the then-23-year-old working-class soap opera. I'm pretty sure it was not officially endorsed by Granada Television or Tony Warren as it does not carry any apparent branding. However it is called "Coronation Street School".

Now there are many areas of pop culture of which I have an unnecessarily deep knowledge (I surprise myself with how well I know Smurfs or Babylon 5 or whatever) but we were not a soap family in my house so I did not know who these characters were at the time. Of course, now I have an unnecessarily deep knowledge of the entire history of Coronation Street. However in this case I was originally paid to research it.

So I now know this panel features Bett and Deidre: 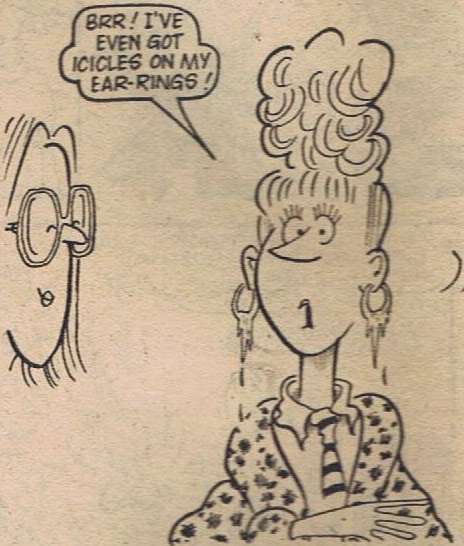 It's a freezing cold day at the school and Hilda suggests they all use hot peppermints to blast away the snow! Also seen here are child versions of Ken Barlow, Stan Ogden, Eddie Yeats and Fred Gee. This stuff is in my brain forever. 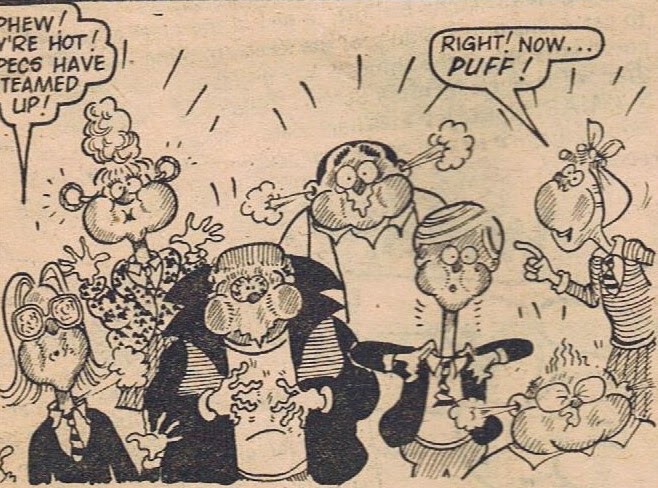 On to the letters page where (remember, corporal punishment is still a thing) readers can nominate someone to be given "six of the best": 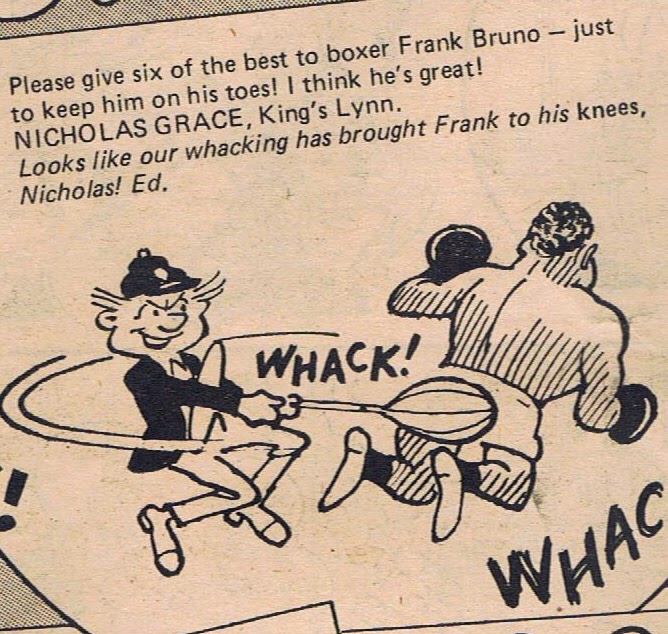 And I really hope someone Googling "school girl spanking" clicks on this link someday... 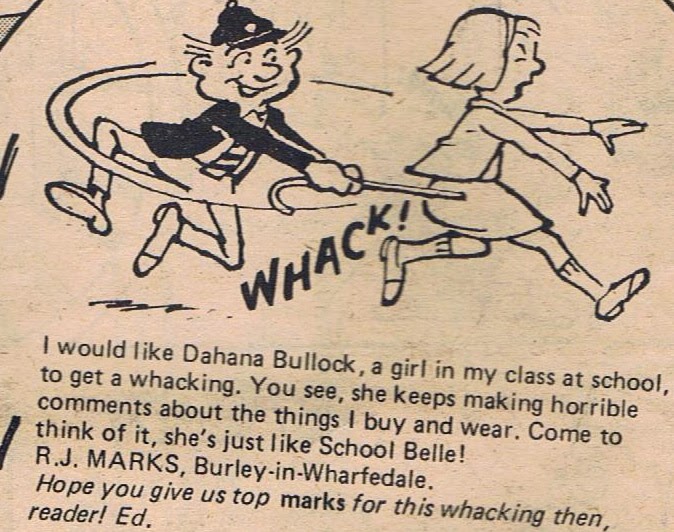 Other characters include Creepy Crawler, an appalling suck-up: 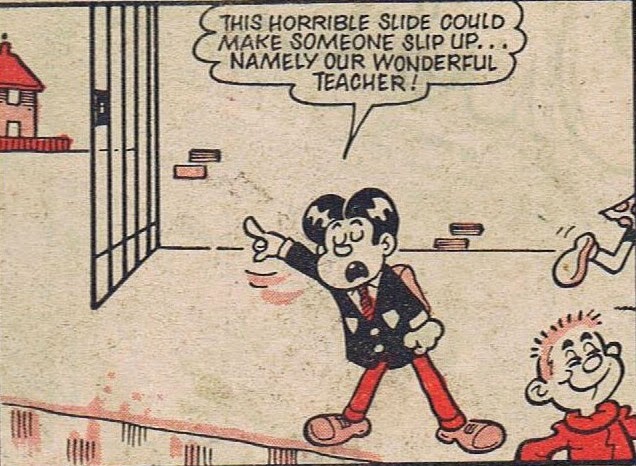 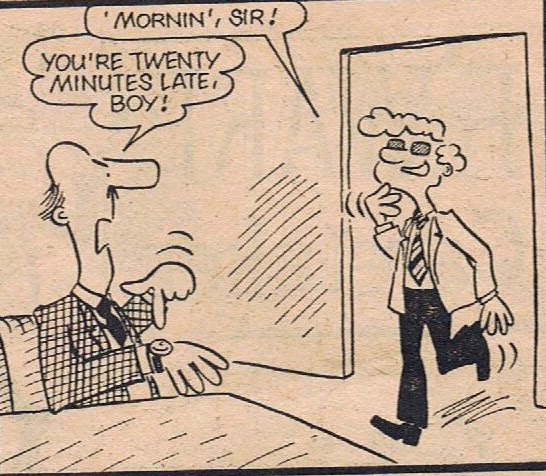 ...and B. Ware: Caretaker, an unpleasant janitor who probably has OCD give his obsession with keeping the school clean. He also has a skinhead and a toothbrush moustache both of which are shorthand for "fascist". 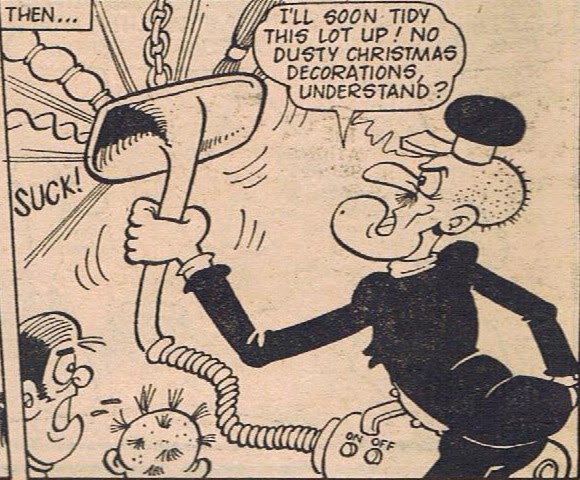 The School Team were a bunch of kids who would enter (and win) a fresh competition every week. This week they predate Glee by winning a prize in a singing contest against all odds.

Okay, their music teacher wins a "special" prize for "managing to put up with that singing all year!" Still, a prize is a prize.

The centre pages have the only full-colour strip: E.T.T.: Extra Terrestrial Teacher (remember, it's 1983). With more art by David Mostyn it's one of the highlights of the comic.

A readers' art page furthers the problem of "softy" stereotyping...

And then we get School Fun's only non-humour strip. Another TV tie-in only this time it's definitely official. Grange Hill Juniors (art by Brian Delaney) featured many of the characters from the popular BBC drama Grange Hill (I don't understand the inclusion of "Juniors" in the title, it doesn't seem to mean anything) and covers similar storylines. 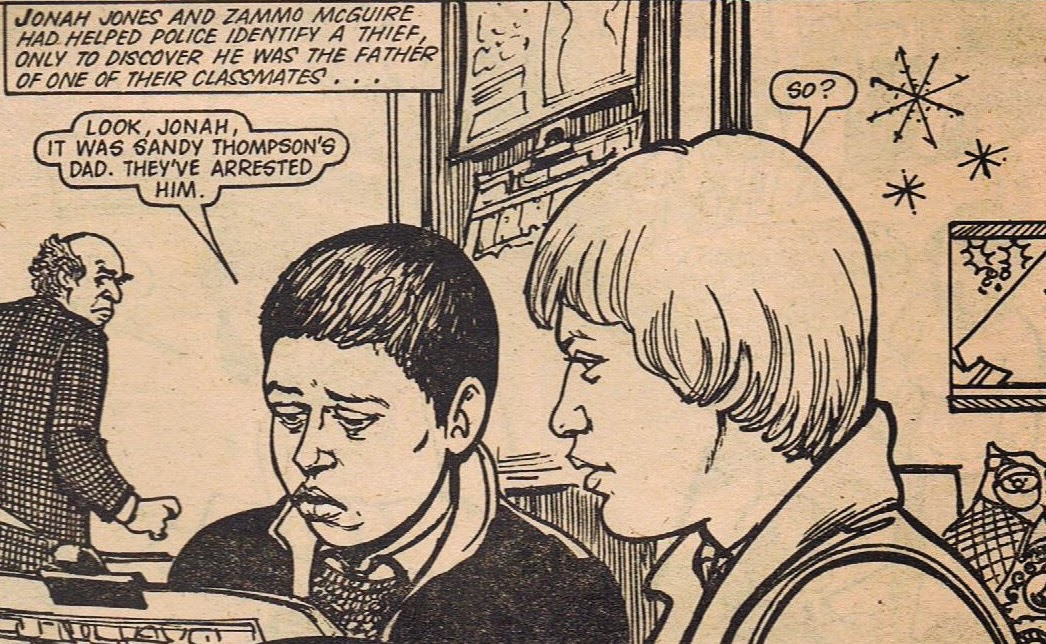 This being the Christmas issue we also get to see Ro-land putting up decorations. 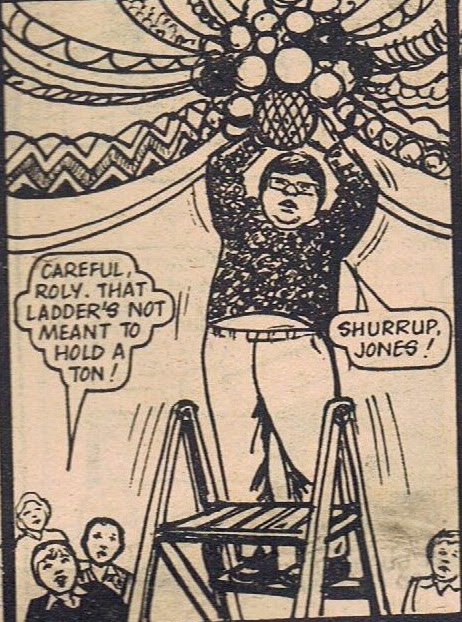 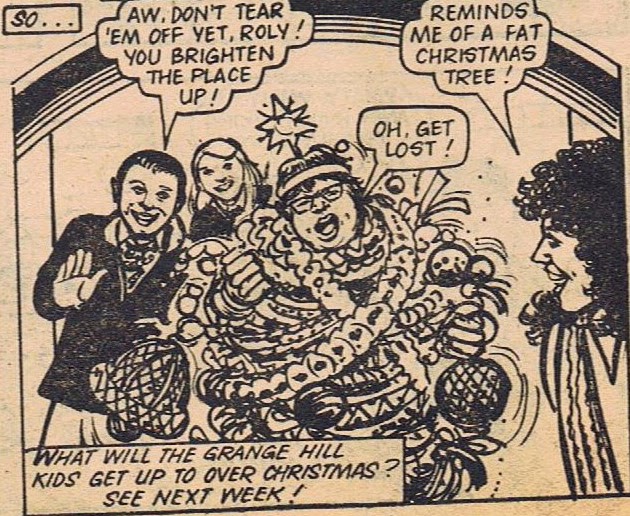 Elsewhere we get scheming over made-up blonde School Belle by the great Tom Paterson: 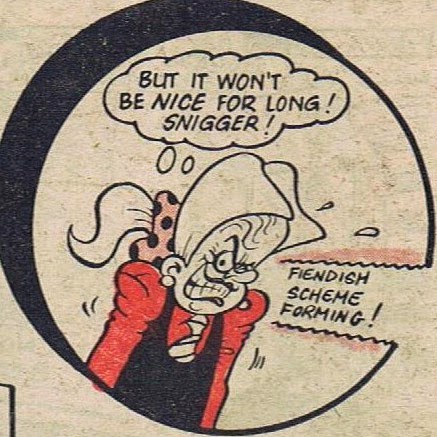 And Time Bus, about a school bus that took its passengers back in time to have adventures with knights or pirates or chartists or whatever. 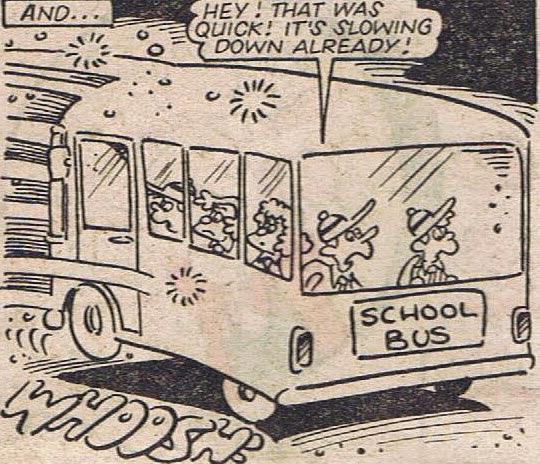 This issue has a fairly cute story where they go to the 1950s and meet a schoolboy who collect meteorites. 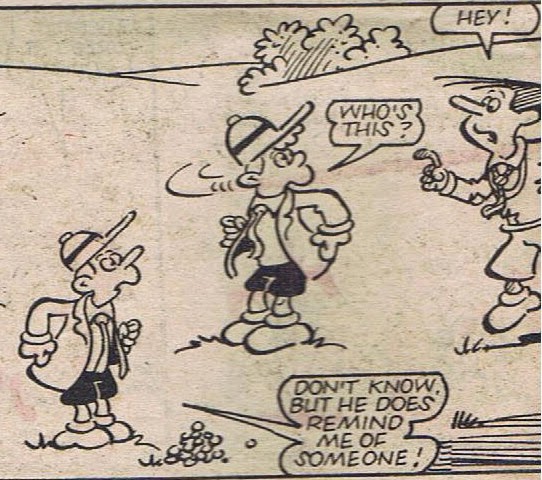 And when they come back to the present to deliver their astronomy homework... 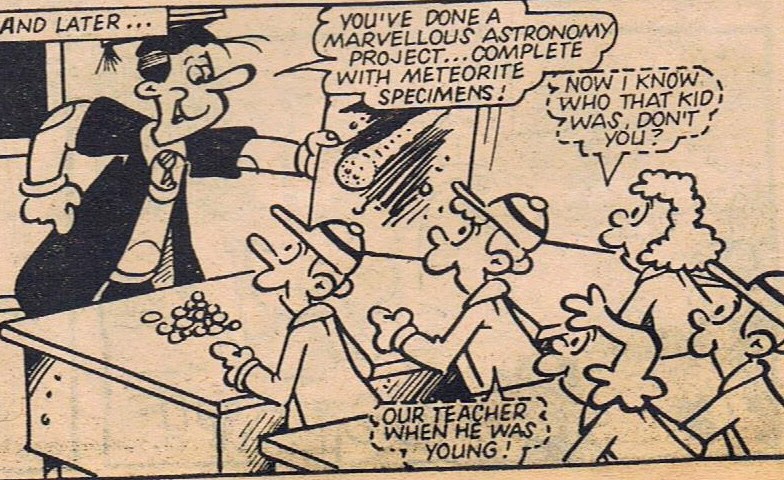 It's like when Sam Beckett meets the young Al in Quantum Leap.

And, travelling further back in time, we have a strip about a British school trip captured in Germany in 1939 and kept in a POW camp impressively called Schoolditz. For real.

Finishing off the comic was Walt Teaser, a little git who mercilessly mocks his classmates. I may have found this funny once but now he just comes across as a hideous bully. 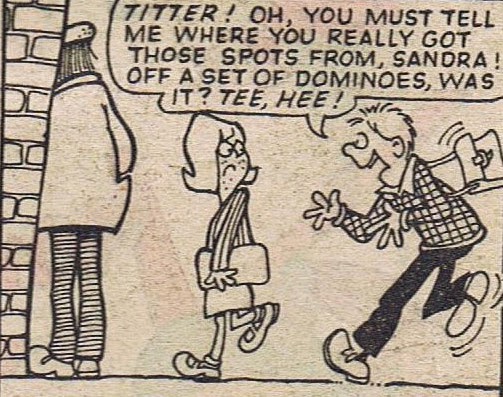 So that was School fun, issue 11, dated 24th December 1983. It hasn't aged as badly as I had feared and it's a shame it didn't last longer. Several strips went on to be a "pull-out supplement" in Buster and Grange Hill would return in "Beeb", another attempt to rival Look-In.

I shall leave you, as I wish I could every time, with an inexplicable picture of Keith Chegwin. 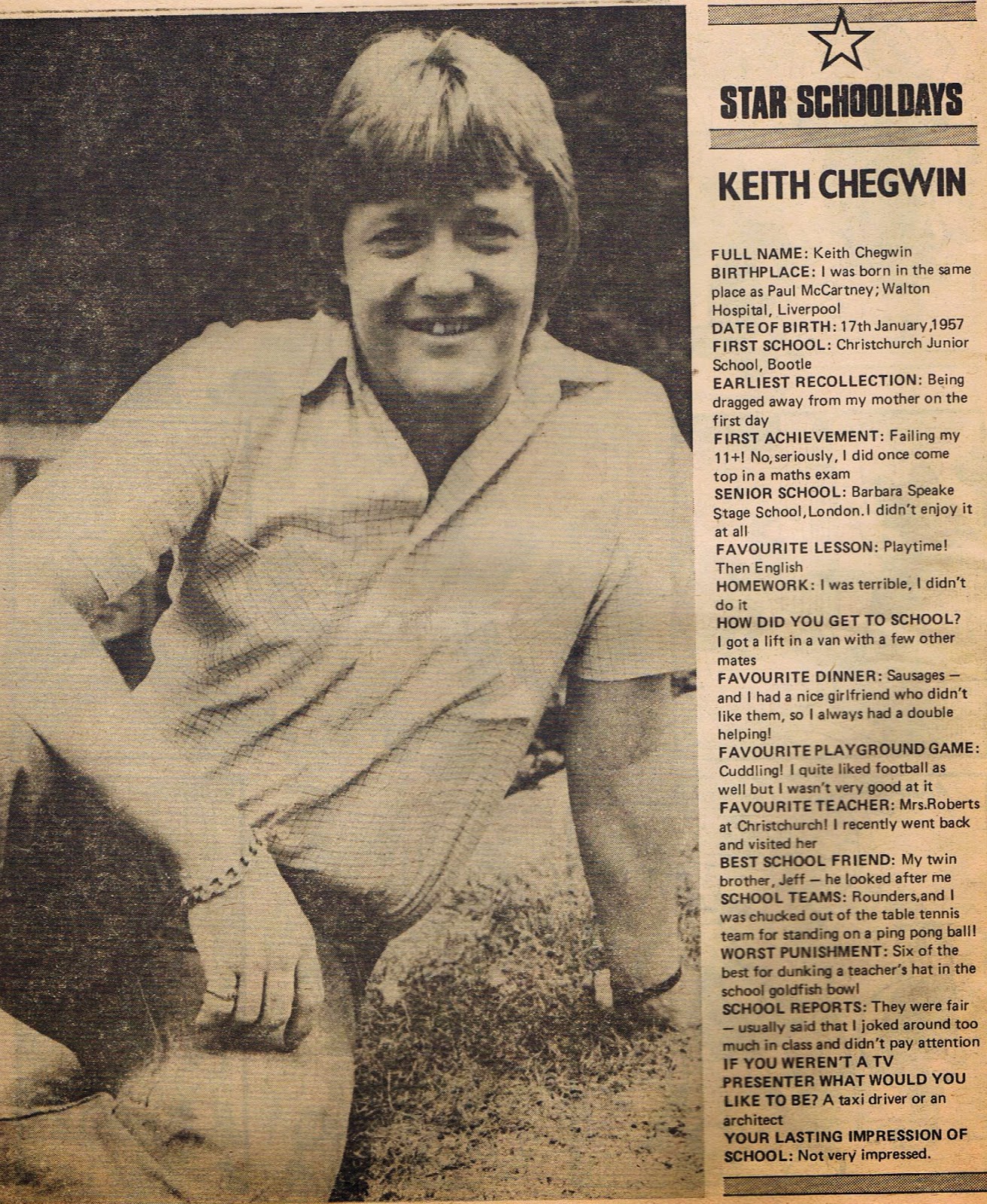