About the relationship between pop music and comics.

There have been plenty of fictional bands with long histories in comics. Dennis and the Dinmakers, for example. 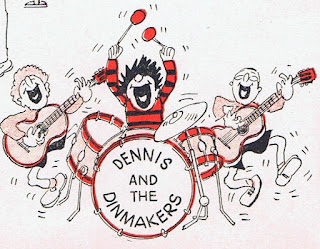 Seen here in their original line up of Dennis, Curly and Walter.

Then there's Deathtongue (who later changed the name to Billy and the Boingers after parent group pressure).

And of course, there is the single greatest fictional band of all time: Josie and the Pussycats! 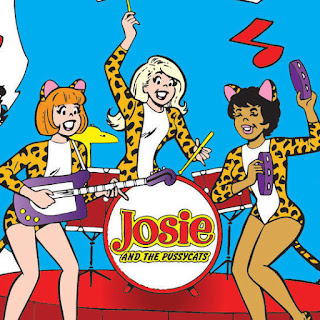 Then there's Marvel's The Mary Janes and Dazzler, DC's Black Canary and many more.

Then there's the real life bands who have made the transition to comic characters.

As is so often in pop culture terms, it starts with The Beatles.

Dell comics got in early and nabbed the rights to publish the first Beatles comic July 1964. It's a solidly drawn but unremarkable history of the band with some pin-ups. And it sold just badly enough for them not to bother with any more.

There are a couple of other official Beatles comics; a Marvel Super Special (again telling the history of the band) and an adaptation of Yellow Submarine from Gold Key as well as an adaptation of Sgt Pepper's Lonely Hearts Club Band (the Frampton/Bee Gees movie) which was only published in French.

Their counterparts in the Marvel 616 universe, however, were replaced by shape-shifting Skrulls at the start of their careers. 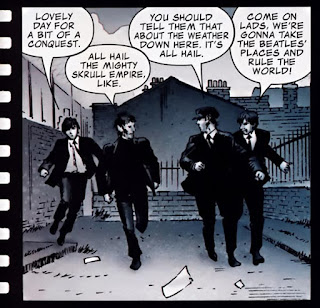 Them Skrulls play the long game.

Perhaps the band with the greatest fictional life is the good old Knights in Satan's Service themselves: KISS! 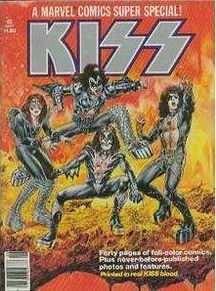 After an appearance in Howard the Duck in 1977, they got their own special, supposedly printed with the blood of each band member mixed in with the ink.

In the Marvel universe they are legit superheroes, appearing in one more special the following year.

They also starred in a crossover with the characters in Archie comics, as well as meeting Dynamite's Vampirella. 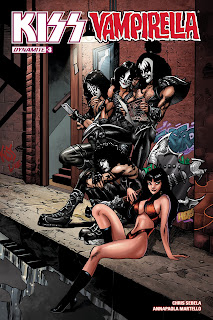 I guess the theatricality of the band lends itself particularly to the over-the-top sensibilities of the funnybooks. In fact, with the make-up, costumes and pseudo-mystical trappings, there's no other act I can think of that would be more suited to being dropped in to a comic book world.
Except maybe Alice Cooper. 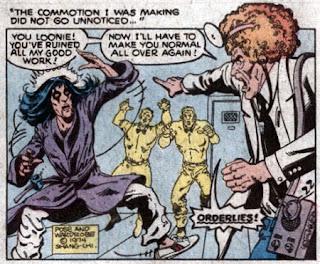 Yep, Cooper also got himself a Marvel Comics one-off in 1979. He's also had some more recent, smaller press titles.
He also has the same name as Betty Cooper's Mum. From Archie comics.
Inevitably, Insane Clown Posse also got on board with this, having a comic from Chaos Comics that started in 2000 and fed on their own mythology. 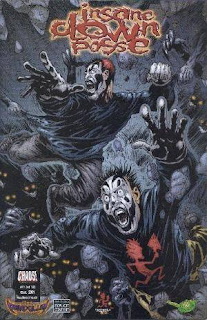 Here in the UK, our bands tended to have adventures that were less grim and more... well wacky.
Madness, for example, who had a regular strip in Look In! in the 80s.

And the absolute insanity of that time Roy Race picked two members of Spandau Ballet to play for his football team, Melchester Rovers in 1986 in Tiger (to be fair they did win the Milk Cup that year). 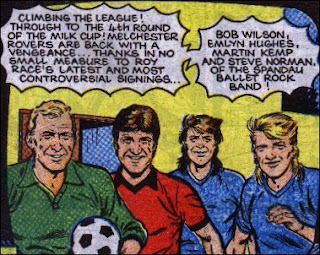 Harvey Comics published light-hearted child-friendly adventures of New Kids on the Block, starting in 1991, even getting them to meet some of their stable of characters. Richie Rich... 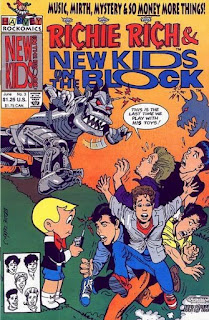 ...and Wendy the Good Little Witch. 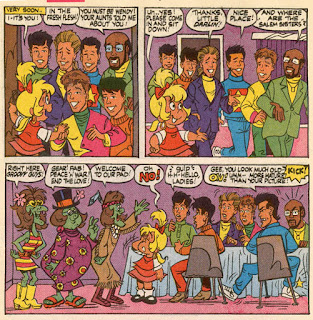 And I could also bring up that time The Punisher fought with Eminem... 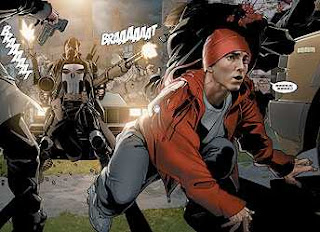 And as recently as 2016 The Flaming Lips appeared on stage with Lila Cheney in X-Men '92. 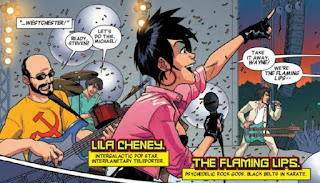 But let's move on to our main story. Hey, Hey. They're The Monkees.

Yes, the cultural impact of The Beatles had an effect even beyond the world of comics. Apparently it had changed something called pop music too.

I'm sure you don't need me to tell you that the massive success of those lovable mop-topped Liverpudlians meant everyone in the entertainment industry wanted their own version. And musical talent was not a high priority.

The Monkees were four young men put together after a lengthy audition process, picked for their looks and charm. Songs were written (and for the most part performed) for them, many of them solid bubblegum pop classics by great songwriters. But the main thing was the TV show.

It was a wacky, colourful sitcom that could drop the foursome in any kind of situation just to have them run around, make silly jokes and beat the baddy. They were kept being the perennial underdogs, success just out of reach.

They were an instant hit and a merchandising phenomenon.

A one-off collection of black and white strips was produced by Popular Library in 1966, so soon after the pilot that Mike is still referred to as "Wool Hat". 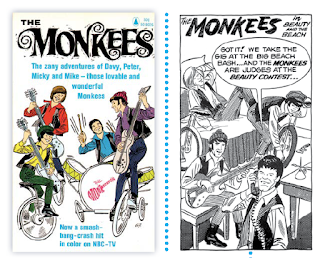 It was reprinted a year later in the UK by the Daily Mirror as The Monkees Crazy Cartoon Book.

By December 1966 Dell Comics got hold of the licence and started publishing strips that were properly in tune with the style of the show.

Typically, a story would start with the boys as literal starving artists, too poor to have a meal between them:

They'd soon get a call to adventure of some kind and be off on some kind of visually expressive romp. 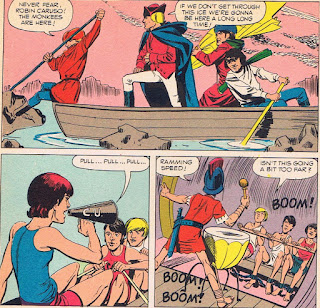 I really enjoy how quickly the scenes change, throwing in as many jokes per page as they can in ways that the TV show wouldn't have the time or budget to set up.

There was a whole team of different writers and artist working on these, including future DC honcho Dick Giordano.

The comic book Monkees could have things done to them their real-life counterparts could not. 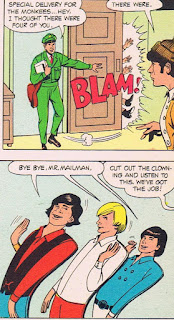 Even their superhero alter-egos appear. 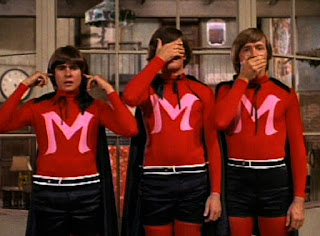 Sure, they call them the Supermonkees instead of the Monkeemen, but it's near enough... 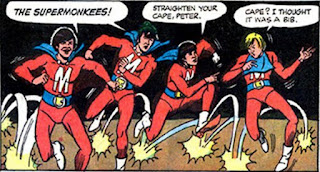 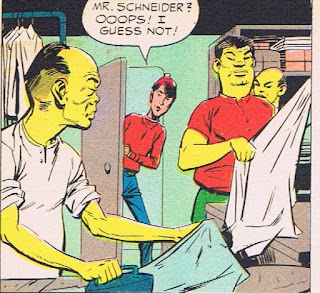 But very little to object to from a 21st Century perspective, which is very refreshing.

The comic only ran for 16 issues (well 17, but #17 was a reprint of #1) and the only UK publication was in two "Annual" style comics albums, which is how I read them.

Before we leave sixties, I feel I have to mention that there is an episode of The Monkees TV show that features an uncreditted Burgess Meredith in his full Batman '66 Penguin costume and persona. 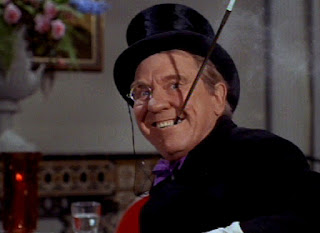 I say "features" but it's really a series of cutaways to him laughing at the boys' antics with the evil stage hypnotist of the episode. He's probably not even in the room. They may have just used out-takes from Batman.

Anyway, skip forward to 2018 and there's a new Archies comic.

The Archies were another product of that 60s bubblegum pop explosion. The characters of the long running Archie Comics (more on them here) were put into a cartoon series in which they were in a band together. The producers hoped that (like many other TV shows of the era) they could spin off some real-world record sales from this. The best result was Sugar Sugar, a massive hit and still a pop classic.

A couple of years ago The Archies had a crossover adventure with The Ramones. 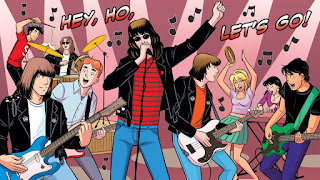 It was silly and fun.

Anyway, when Archie relaunched its Archie characters in the new style, it kept the band together.

Then in October 2017 a new series launched written by Alex Segura and Matthew Rosenberg (of the previously mentioned Ramones one-off) with art by Joe Eisma.

It tells the story of teenage band The Archies going on the road, trying to make it in the tough business called show. 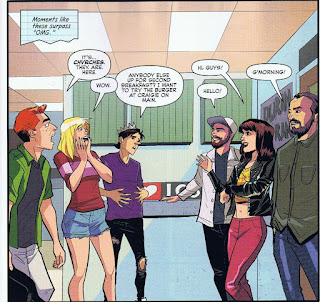 But issue 4 (out now) features the reason I wrote this: Presenting The Monkees! 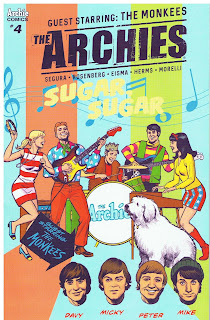 No time travel this time, it's a pure dream sequence cop-out!

When Archie is knocked out during a gig (it wasn't going well) he wakes up in 1966 and watches someone get kidnapped!

It was Davy Jones! Making (I believe) his first public appearance since his death in 2012.

We get to see the Monkeemobile... 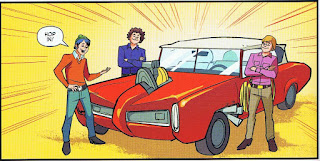 The wacky cartoon rules of the Monkees' previous comics starts affecting the Archies in ways they find confusing.

By the way, those are canon costumes from old-style Archie comics. Many Archie characters have superhero counterparts. Archie is Pureheart. Betty is Super Teen. 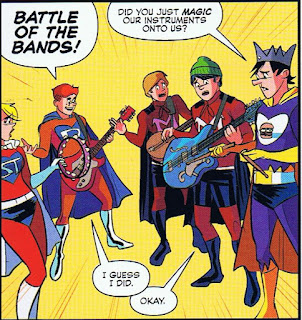 And the whole thing ends with a bubblegum supergroup. 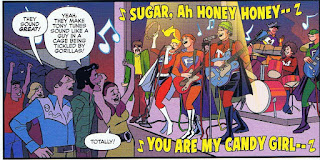 And as the Monkees get to sing the Archies' song it's only fair that when Archie regains conciousness IRL he gets back up and sings a Monkees classic! 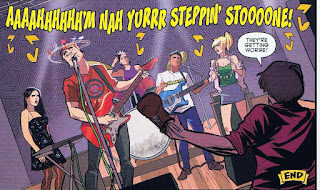 This was a lot of fun and you should get it while you can.

And next month The Archies guest stars Tegan and Sara. Which is pretty cool but I doubt I'll have as much to say about that.


P.S. Hey DC Comics! If you don't commission a Batman '66/Monkees crossover you are missing an open goal!
Posted by The Slipper at 16:12 4 comments: