Batman pays tribute to The Dandy

One of the better-known strips out of the many to have been published is called "Bully Beef and Chips".

It debuted in 1967, drawn by Jimmy Hughes and featured an amiable boy called Chips, perpetually threatened and/or thumped by a big bruiser called Bully Beef (or "Beefy" for short). Here's a picture from their first outing, helpfully reprinted in The Dandy 75th Years Special which is out now (sadly exclusive to WH Smith): 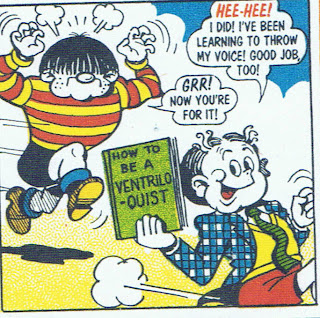 It was a simple format that made it enduring. Bully picks on underdog, underdog uses cunning to defeat bully. Born and bred in the briar patch. The style changed a little over the years. Here's the version I grew up with, this image taken from The Dandy Book, 1975: 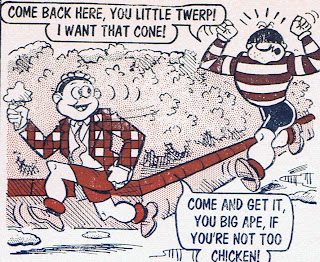 It lost its appeal (at least for the publishers) during the 90s when children being bullied became a touchy subject for comedy but after a couple of revival attempts this is how they look in the current issue of The Dandy: 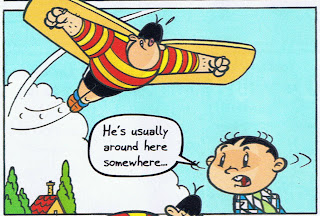 But another reason they have been remembered over so many other characters is that the spirit of the strips was transferred to the decidedly non-child-friendly pages of Viz in the form of Biffa Bacon (taken from the annual The Last Turkey in the Shop): 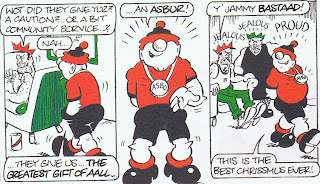 I was reading the latest issue of Batman Incorporated this week (Volume 2, Issue 3 if you must know, written by Grant Morrison, drawn by Chris Burnham) and watched Matches Malone (one of Batman's undercover identities) quizzing a boy about Leviathan. Or a man with a growth deficiency who looks like a boy. "Huh" I thought "That henchman looks familiar." 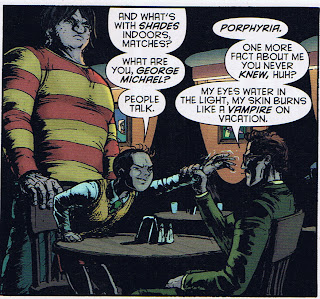 I reached over a grabbed a Dandy (always keep a Dandy handy) and flipped to Bully Beef and Chips. Yep. Looks just like him. If that's a coincidence it's a terrific one. But Morrison (a Scotsman) has previous form here. He attempted to introduce a British comics sensibility to Batman Incorporated before during a storyline in which Batman came to Britain to aid The Knight and The Squire, who then had an excellent spin-off miniseries written by Paul Cornell. That miniseries paid direct homage to the Oddhams/Fleetway comics style, including having a villain called "Jarvis Poker, the British Joker". 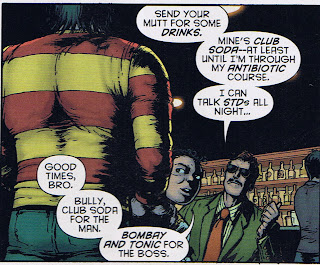 Then the little fella calls his goon "Bully". Okay. Definitely deliberate now. Oh, hang on doesn't he look like... Yes, it's not as obvious but he's dressed like Chips and has his silly curls. And when Batman calls him "Small Fry", he gets corrected: 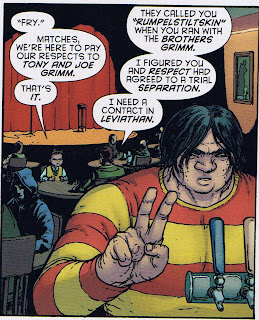 So there you have it. The British Joker is called Jarvis Poker and the American Bully Beef and Chips are called Bully and Fry.

And people tell me I've wasted my life.

The timing of this means Morrison couldn't have known he was paying homage to a comic that was about to end (unless something very unusual happened) but I doff my cap to him once again.
Posted by The Slipper at 09:48 No comments: