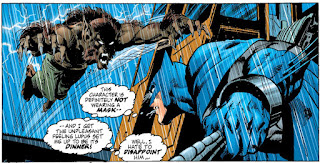 It's that time of year again! When we find out which of our devices will automatically put the time back one hour and which won't. Oh, and Hallowe'en.

We've done ghosts, draclias and frankingsteins on previous Halloweens, so this year we've

There were more of these than I thought so to cut down the list I am not including characters that only appeared in a single issue (eliminating a lot of UK and US horror comics) or characters that appeared among ensembles such as families (like Uncle Raoul from The Bojeffries Saga) or teams (Warren Griffith from the Creature Commandos). So if I'm missing your favourite, I'm sorry. But you tell me who it is in the comments.

The rules meant I couldn't talk about my favourite New Mutant, Rahne Sinclair. 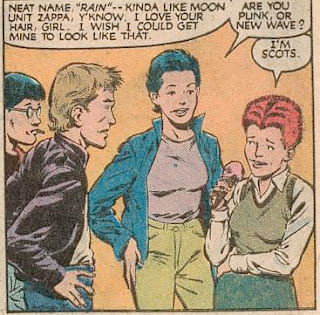 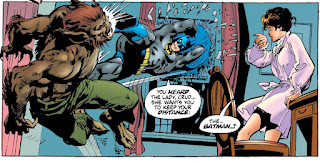 There are surprisingly few recurring lycanthropes in the DC universe so I'll start the list with this Batman adversary.
Lupus (yes, really) isn't actually a bad guy, he's being manipulated by Professor Milo, who has promised to cure him of his condition... in exchange for doing some little jobs (like killing Batman).
Ultimately he removes himself from society to live with Alaskan timber wolves before Batman has to bring him back to save his dying sister.
Scare factor: 3
A well-meaning guy under it all but his feral beast side gave Batman a run for his money. 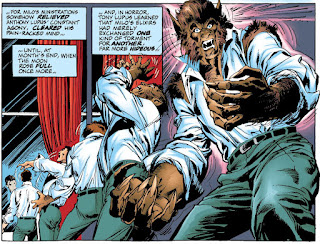 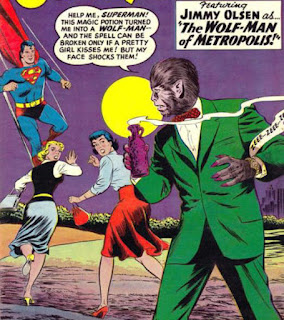 My love of the Silver Age adventures of Superman's Pal is well-documented so I had to include this. Jimmy has been wolf-manned at least twice.
See, Superman gave Jimmy a bottle of potion he'd got from Merlin (a perfectly ordinary thing to happen in the Silver Age) and after accidentally drinking from it (honestly, Superman what were expecting to happen?) finds himself transformed.
Only the kiss of a pretty girl will lift the curse but even his (sort-of) girlfriend Lucy Lane is not happy about that idea.
When it happens again, in a story involving extra manipulation from Mr Mxyzptlk, Jimmy manages to get a kiss from just about the entire cast of female characters in the Superman family to no avail! 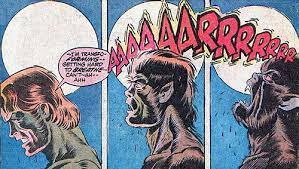 From a time when Marvel were trying to bring horror comics back (Tomb of Dracula, Ghost Rider, Man-Thing) came the story of...
Jack Russel!
Yeah, Anthony Lupus sounds better now, right?
Jack (or Jacob as he was known then) finds out as a teenager his family has the werewolf curse and he too will find himself transforming and play on the school's basketball team.
Played out as a sad curse, Russel was desperately afraid of taking human life so would lock himself up when the full moon was due.
His own title lasted more than three years and he's kicked about the Marvel universe since then, including occasionally teaming up with similar creatures in The Legion of Monsters.
Scare factor: 3
For exactly the same reasons as Lupus. 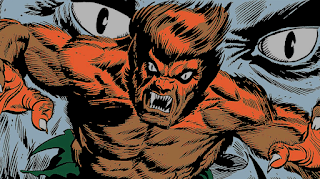 Hero astronaut John Jameson (yes relation) not only gets really good press from the The Daily Bugle but he's actually been to the Moon!
And, this being the Marvel universe, he found a magic ruby there that could turn him into a wolf creature.
Obviously.
His ability to control these transformation very much depend on the story he is in.
Oh and he also spent some time in another dimension called Other Realm where he ruled as Stargod. So there's that.
He has also made some interesting style choices.
Scare factor: 2
Mostly on the side of the angels but can lose control. 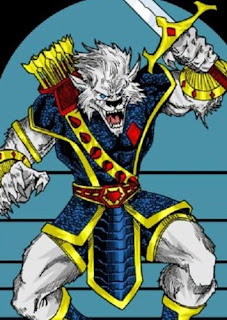 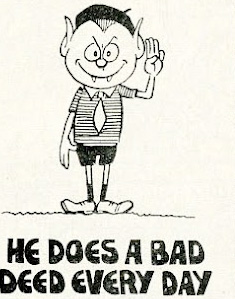 Twisting the Cub Scout motto of doing a good deed every day this wolf cub (living with perfectly ordinary human parents) is egged on by a sinister Akela-type figure to cause trouble in this strip by UK legend Reg Parlett.
The series ran in Cor!! from 1970-72 and would typically feature Freddie attempting to do something to ruin someone's day before it backfires and he's accidentally done them a favour!
Scare factor: 1
Utterly useless but he's meaner than Jimmy. 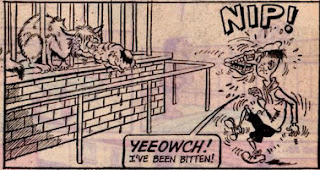 This short-lived strip by Graham Allen arrived in Whoopee! in 1976 and started by having a trip to the zoo marred by young Wilf getting a nip from the flying false teeth of a sneezing wolf. Yes really.
A typical strip would see Wilf being bullyed/picked on/excluded by someone who would then get the fright of their lives when Wilf transformed.
Scare factor: 4
He's not gonna eat you (this is a children's humour strip) but the design is intended to scare!

Staying with UK comics but going back to the Marvel universe we have this character who first appeared in Super Spider-Man and Captain Britain in 1977.
A charming aristocrat, Rupert Kemp, has been talking to Brian (Captain Britain) Braddock's love interest Courtney Ross and soon he's asked her back to his castle where we discover that he is secretly...
A VAMPIRE!
Eh?
So he's nothing to do with the string of werewolf killings around foggy old London town, then?
Erm... yes. That's him too.
He's a vampire and a werewolf! Unlucky, man.
Anyway, long story short, Captain Britain stabs him with a silver chalice he found in the Baron's home after squishing one end to a point.

Scare factor: 4
An actual credible threat but for heaven's sake pick a lane! 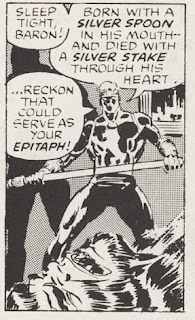 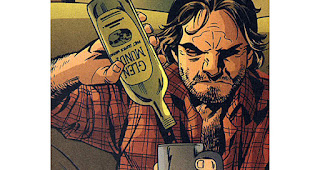 All right, not really a werewolf, I'll admit. Technically his natural state is wolf and he uses magic to appear human. I just wanted to mention Fables.
Bill Willingham's Vertigo series is about fairy tale characters living in exile in modern day New York. Bigby has been elected to serve as the sheriff of their community. However not everyone in town trusts him because he was previously the Big Bad Wolf of various stories.
He can transform back to his lupine self if required though.
Scare factor: 3
He's a good guy but he can be the bad guy if necessary. 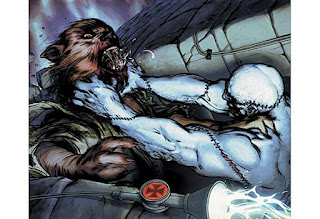 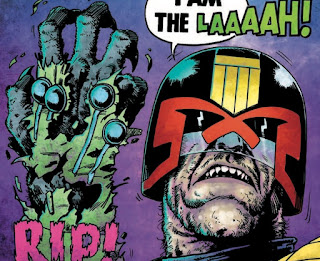 Wait, what?
Yes, in 2000AD, progs 322-328 (1983), Mega City One has a werewolf outbreak.
After some initial skepticism, enough Judges see the werewolfs (including one that was once a Judge) to understand what is going on. We're working on the "get bit, you turn" rules.
Dredd figures out that he needs to leave the Mega City to find the source. He finds himself in the long-abandoned city of New York and defeats the white werewolf that started it all. 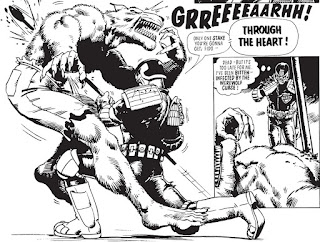 Unfortunately he also received a bite that curses him too. After living as a wolfman in the cursed earth, it's only luck that means he is rescued by a disgraced Judge who brings him back to Mega City One where they synthesised a cure.
Scare factor: 3
Significantly less scary than regular Dredd.
This may be the only time we ever see Dredd without his helmet! (I've not checked) 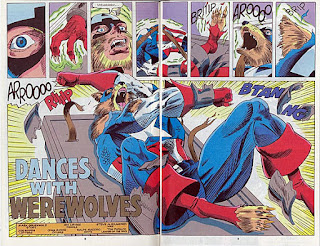 I'm in the middle of reading Mark Gruenwald's run on Captain America (thanks Disney+!) and one of the highlights has been
THAT TIME CAPTAIN AMERICA BECAME A WEREWOLF!!!
A plot by Dredmund, the Demon Druid (man, I love superhero comics) using John Jameson's moonstone leads to Steve Rogers being werewolfified.
Along the way he fights Wolverine and Cable, Dredmund becomes Starwolf and a transdimensional evil version of Cap shows up (cos Infinity War was happening at the same time).
Anyway, the best thing that happens is that Cap saves the life of the president (heavily implied to be Reagan) after he is also infected and becomes a werewolf.
Comics are fun.
Scare factor: 1
Even werewolf Steve retains his morality. 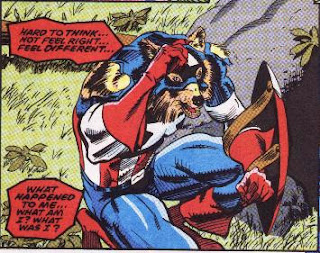 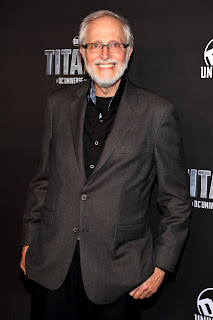 To be honest I thought of throwing the long-time DC writer and guest star on last year's CW crossover Crisis on Infinite Earths as the punchline because his name but then I remembered an actual thing about his name.
See, for many years comics were bound by a code set by the Comics Code Authority (it was a whole thing caused by a moral panic in the 1950s) and that code has a list of things that weren't allowed in comics. A list that was mainly devised to ruin EC Comics and other horror publishers.
Anyway, in 1969 DC published a story in House of Secrets #83 which was credited to "a wandering wolfman". The CCA rejected the story as "wolfman" was a banned word. DC's Gerry Conway had to explain that this was, in fact, the author's actual name and the ban was lifted.
A side effect of this is that DC started giving credit to its creators.
Scare factor: 0
He's a cuddly old man. I imagine. I don't really know much about him. 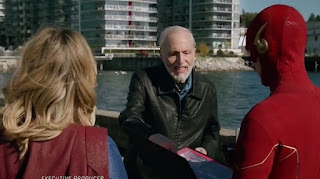