The OTHER side of Rolf Harris (not that one)

Like many other humans in this country right now I am sad about a huge chunk of my childhood. The guilty verdict brought against Rolf Harris yesterday will have far-reaching consequences for all those who saw him as a cuddly uncle figure and charming entertainer. I do not wish to make light of what are undoubtedly horrific crimes or their many victims (more women are coming forward all the time) or claim any victim status myself just because some bloke I never met turned out different from expected.

However, Rolf had a special place in my childhood. When my family got a video (borrowed from my Dad's job initially) the first programme I recorded off of the telly was Cartoon Time. I was a massive fan of golden age animation as a kid and loved seeing them presented on a half-hour show by this chap who'd draw pictures whilst talking about them and make silly musical noises. Then he moved from BBC to ITV and began Rolf's Cartoon Club ("You can join today!") which expanded the format and gave actual information about the studios and animators who made those toons. At some point I'd start to notice that this man who was talking knowledgably about the history of animation was making mistakes. I must have realised that he was saying scripted words from some under-paid researcher at some point and grown disillusioned.

Then, at some point in the late 90s I started to hear darker rumours. We all hear rumours about celebrity proclivities at some point. Even if we believe them we don't think anything will happen. Nor do we really think about the victims.

This, though, is a comics blog, so where are we going? Wow!, that's where. 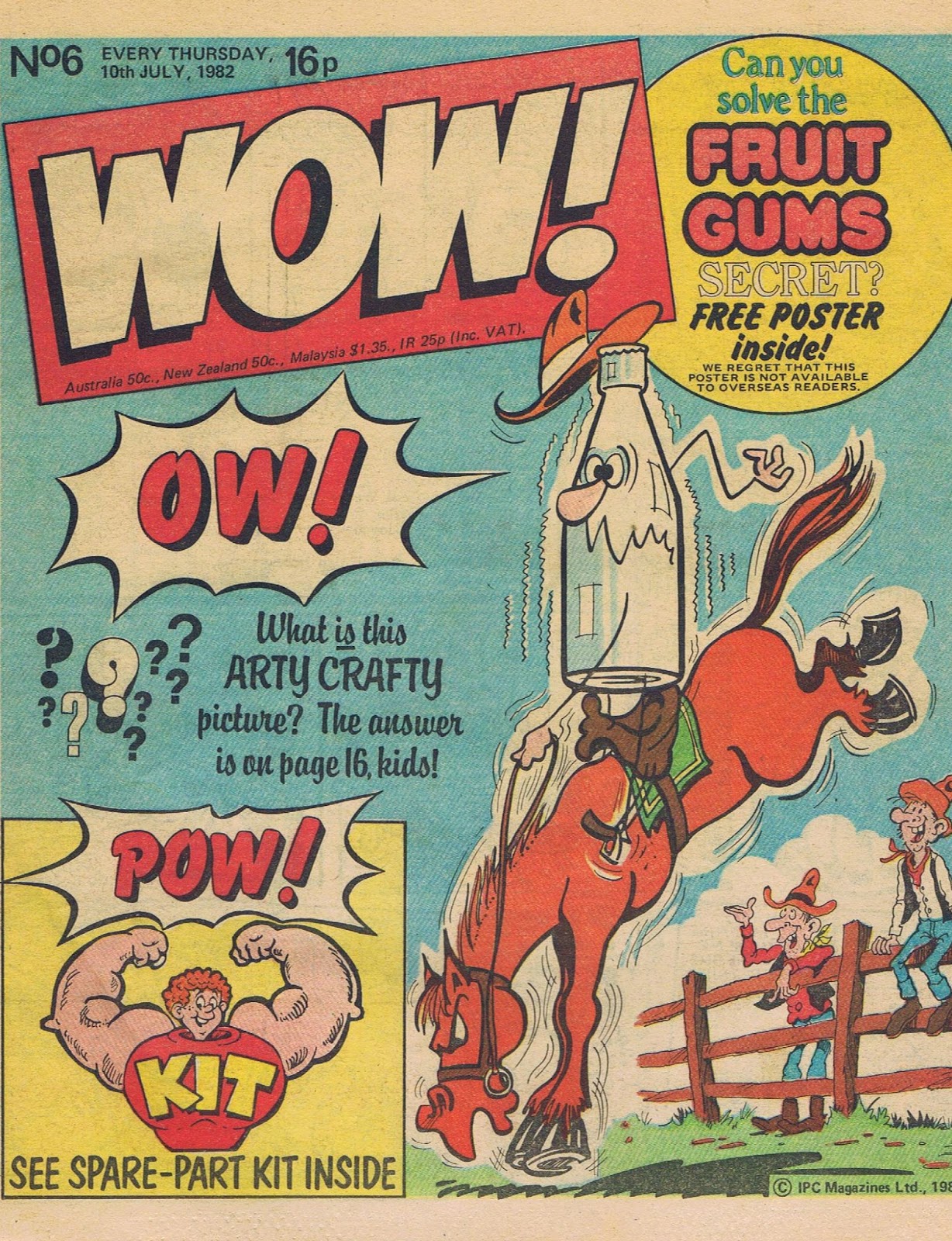 I think I may have read every issue of Wow! as a kid. It ran for just over a year (from June 1982 to June 1983) and I have very distinct memories of reading the "origin" story of many of the strips inside on a Butlins holiday in Pwllheli. It's more successful characters moved in to Whoopee! when it folded making the actually quite satisfying "Whoopee! and Wow!"

Anyway, I found a copy of issue 6 recently (dated 10th July 1982) and remembered it was also another area of my life infiltrated by Harris. 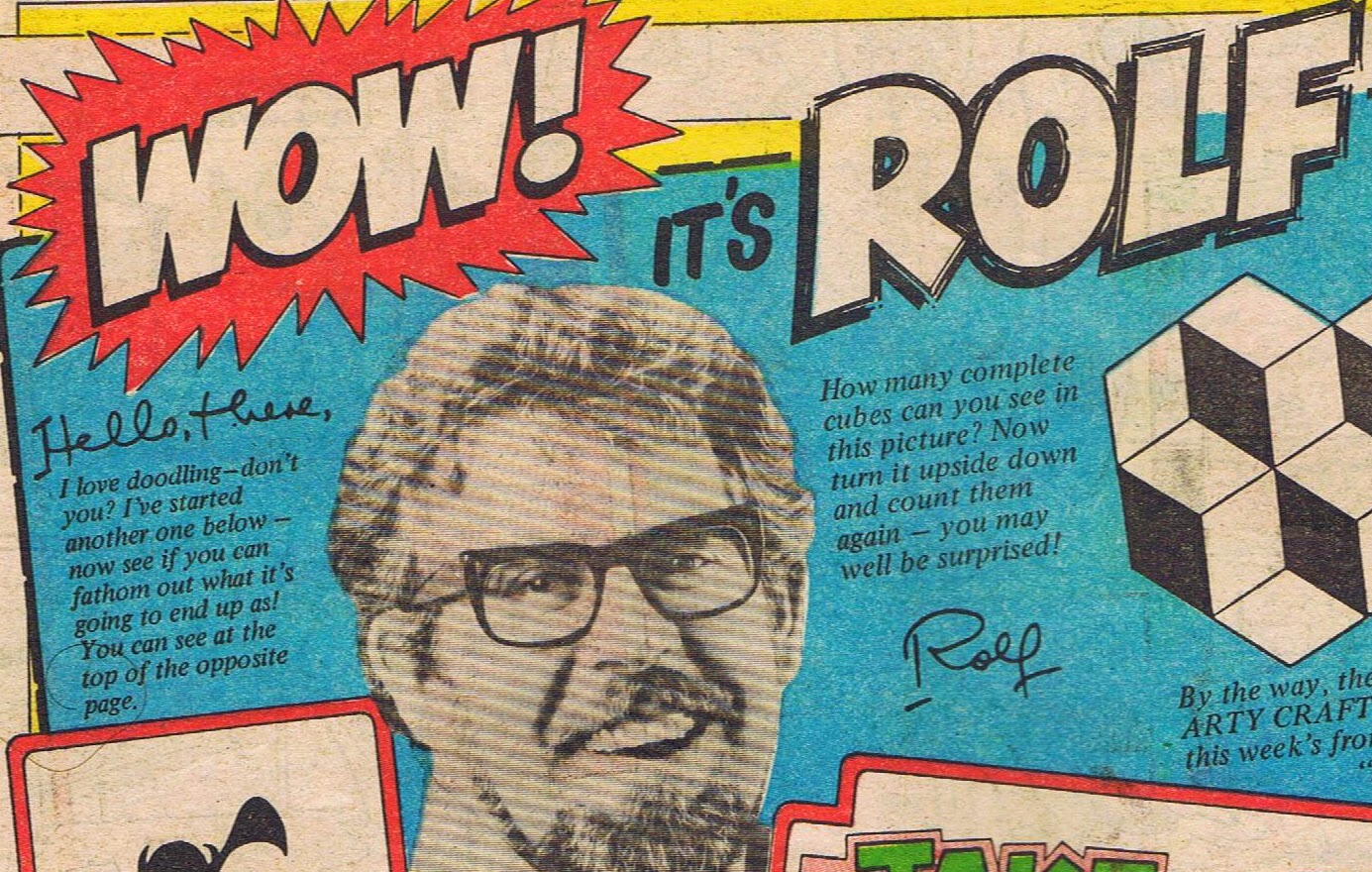 The centre pages of each issue were given over to the TV star with puzzles, competitions and strips. In the main strip, Rolf invited children to play with his magic brush. No, really. Rolf's Magic Brushes allowed him to paint "real" things! In a typical strip, Rolf was left with an unsupervised child: 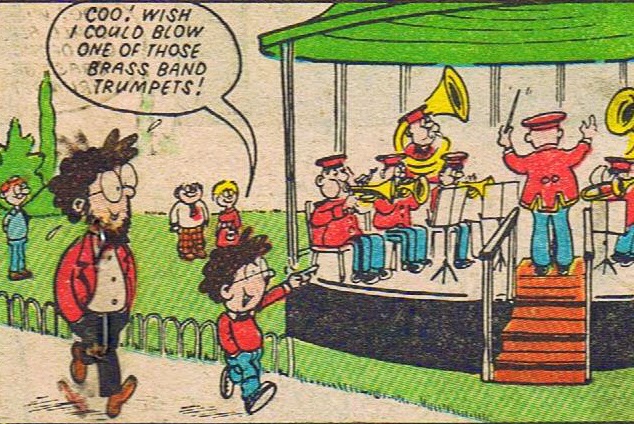 And would open his coat: 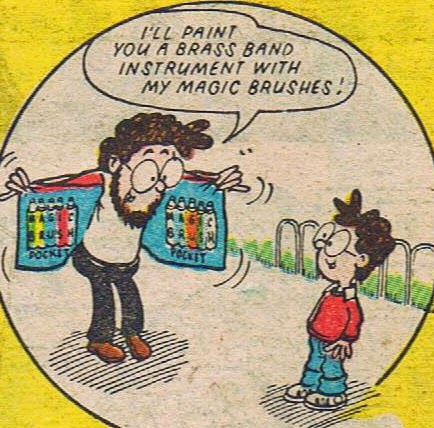 I'm not enjoying this. I'm really trying to avoid distasteful innuendo.
I did sort of wonder why IPC never sued the creators of Penny Crayon which was the same premise. 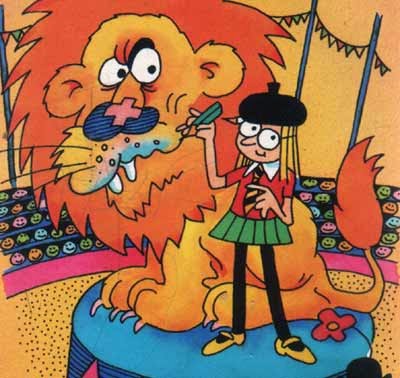 And then I remembered Simon in the Land of Chalk Drawings predates them both. 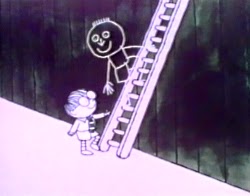 Sorry, got off on a bit of a tangent there. Every week there was a competition to win a pack of Magic Brushes which I desperately wanted. I don't quite know what they really were but I'm sure if I'd got some I would have been severely disappointed. 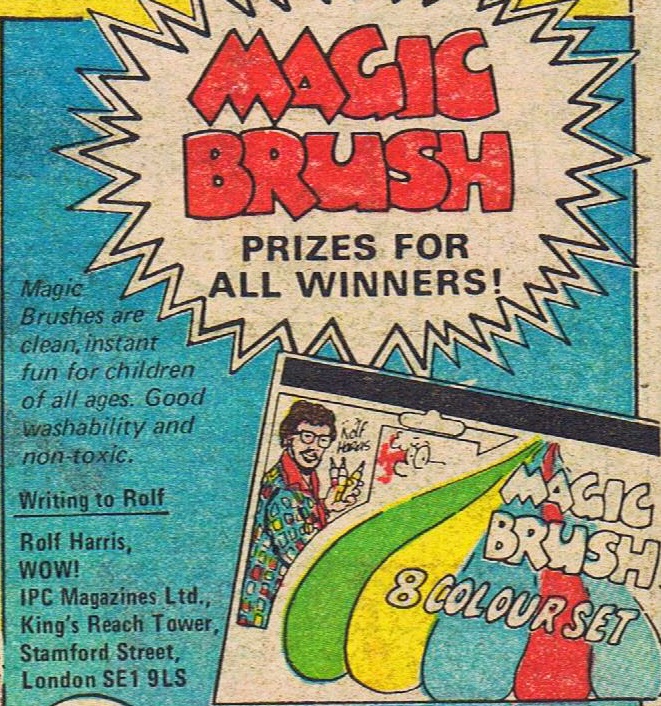 There was one other strip, but I think the less we should say about Jake the Peg's middle leg, the better we'll all feel.

So let's have a look around the rest of the comic. Wow! seems to have a lot of strips that feel very 1982. For example there's Bleep... the Wow! Robot:

Clunky robots were huge in 1982. Doctor Who had one (well he was actually between clunky robots in 1982 but go with it), The Goodies had one even the Green Cross Code Man had one. And the world had fallen in love with Metal Mickey. Or at least tolerated him for a while. Oh, and Timothy Claypole on Rentaghost had one.

There was "Hi De Hi...Hi De Hooooo!" which was based on a popular TV comedy about a holiday camp. Only with ghosts. I'm willing to believe the writer of that one wanted to knock off early the day he pitched that. 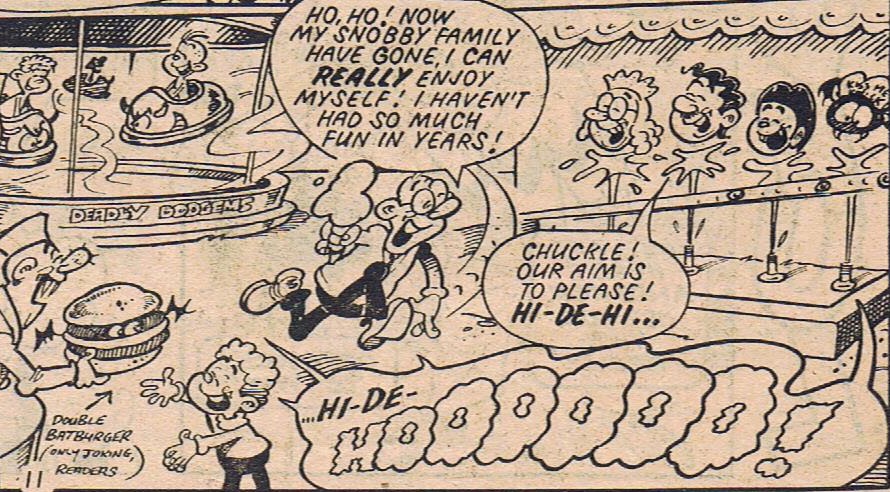 And KBR (Kids' Band Radio) which used the new CB radio fad to throw out tons of slang terms: 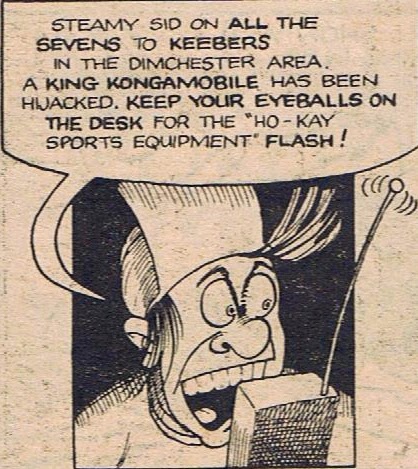 Each strip came with a glossary at the end to help the readers keep up. I don't know how much was real CB slang and how much made up by the writer but I'd guess 50/50.

Elsewhere there is the Shipwreck School, a class stranded on a desert island with only their oddly strict teacher for company. I remember the first strip in which a school trip goes disastrously wrong, setting up the premise of the on-going stories but now can't help but think of all those fictional ship's crew members who lost their lives for weekly whimsy.

And the rather pleasing Creepy Comix in which a boy inherited a pile of old horror comics (clearly the writer lamented the passing of EC et al and wished to evoke the spirit) whose characters would escape the pages, usually to right a wrong or punish the wicked (in true EC style, albeit in a humour strip).

It's the other features that left me the most baffled. A two-page spread of celebrity pictures with jokes in speech balloons (Wow! Star Turns) featured Daley Thompson, The Three Degrees, "England manager Ron Greenwood" and this confusing picture: 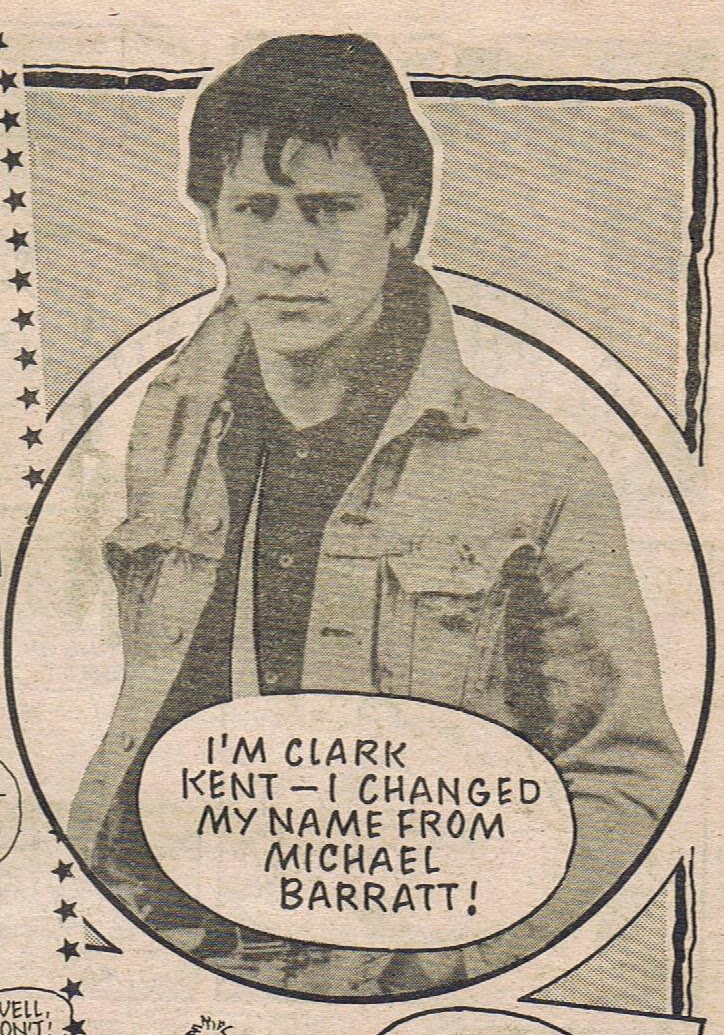 I do not know what this means. Are they suggesting Shakin' Stevens looks like Superman? Am I missing something? Is Michael Barratt Shakey's real name? If only I had some method of looking that up.
And then the "Next Issue" promo page promised this: 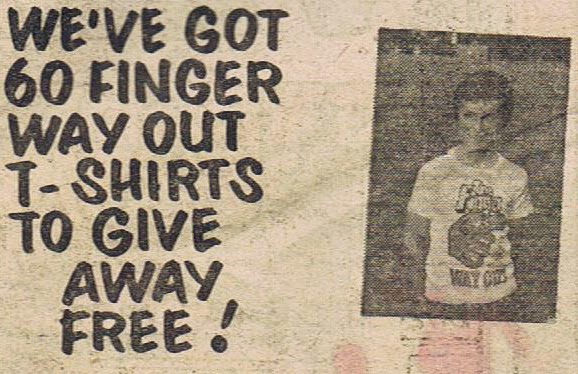 I have no idea what a "Finger way out t-shirt" is. I know all the words, just not in that order. The picture does not help.